Bashing a way in to the Test team

ok, so i accept that i'm pretty much in a club of one here at DTW regarding T20. That is fine and a reason why i don't moderate- diversity of opinion is one of the best ways to learn new stuff that a person may not have considered before due to only seeing things from their own perspective.

I've said all along since taking NOS (number one son) to our first Big Bash game 3 seasons ago that i know it to be "junk food cricket" and it best serves a market of kids and adults with ADHA... or those that would rather any form than nothing at all.

I am though, totally on board with the suggestions that the timing of this BBL and the postponing of all (state) multi day cricket is detrimental to that which must always be considered the first priority- the Test team.

Now it seems that while the mainly print (and online print) media have been quick to point out that the crowds have been below expectation at BBL games, this has always been supplimented with the additional statment that TV audiences have been solid. I can't help but wonder what international players would feel playing in a venue as amazing as the G in front of 1,000 ground staff should it come to pass that the format ends up only serving a TV audience?

Anyway, back to the media. What i have noted has been an escalating amount of media refering to the BBL as players opportunities to find form/prove fit/get eperience to ensure a test team berth. Clarke mentioned it several weeks ago regarding Hughes finding form. But he clarified that that was the only opportunity for Hughes due to the lack of Sheild games, it was apparent he felt this to be an unsatisfactory situation.

I think 4 years ago we all would have pencilled in one M.Clarke with his bling, car, model girlfiend, hair and youthful 'i can have the world and all of its rewards' as the leading cadidate to accept a cash v career in the IPL. He has matured into a player that has upheld the value of Test and has not failed to support his stance with actions and words. While he may be considering a spell next IPL season, i am confident he would only do it after much consideration as to how it may affect his other responsibilities- and not to their detriment.

I challenge you readers, check online, papers etc -even on air- every sport section is carrying at least one reference to this disturbing occurance of refering to BBL as a Test entry point. At the moment it is in reference to Marsh and his big knock last night for the Scorchers. Warner was mentioned earlier in the week, but he had cemented his spot anyway. We all know he is going to get out now and agin due to playing big-bash type shots in Test, but if he can regularly show enough capacity to settle and carve out an innings i'll accept that.


On a completely different subject, i'd like to mention one 300kg S.K.Warne!

I think it proper that on Boxing day after meeting at the Captain, those of us going pilgrimage to gate 2 to pay homage. Although i imagine it will be busy! 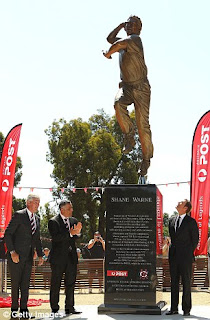 how peculiar is this? The origin of page views to DTW this week. 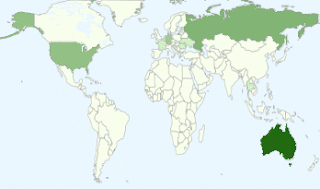 and origin for the life (so far) of DTW

A couple of hours to go now befor the announcement of the Boxing day team. A few things have come to pass in the last 48 hours, most notable that Watson hammy looks unlikely to be ready, cap number 427 AND 428 look likely.

Cowan just keeps offering up reasons why he must be in contention; how long can he be overlooked?


Melbourne area Cloudy. Areas of rain and the chance of thunderstorms during the morning. Winds northwest to southwesterly averaging up to 25 km/h becoming southwesterly up to 30 km/h during the afternoon.


Of interest was the odds at one of the larger online agencies:
Australia favourites at $2.35, India at $2.50 I trust this is just a reflection of the local punters hopes more than anything else; a draw at $4 looks ok!

no luck with finding suitable T shirts on the weekend gentlemen. Sorry. I made a pest of myself all over Southland but to no avail. i meant to check out the G shop but it was getting late for the young 'uns.
Posted by Cris Cochrane at 12/19/2011 12:16:00 pm 2 comments Links to this post

Well gentlemen, for the 2nd year running it looks like Melbourne is going to serve up another turd weather wise on this most venerable day.

with temps predicted to be in the low to mid 20's and thunderstorms the ball could arc around all over the place... or not!

I was at the G on Saturday and a week out the pitch to be used was still greener than the tops worn by victorious Sydney Thunder. 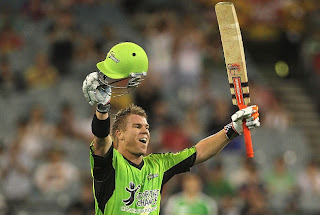 talking of which, watching the back to back 100's from Warner in the polar opposite forms of the game it must be said he has a rare talent. Sure his Hobart knock wasn't perfect, but he kept his head and control when all those around him failed.

Watching him belt everybody to all parts on Saturday all i could think was that if he then showed in 9 days time that he could settle back into a Test cricket frame of mind, the cricket world is his oyster!

I'm not going to go into the big step back and swing shots- we know what they are and represent, but many of his orthodox shots looked like he had half an hour to play them. He just looks to have either a great ability to see it out of the hand and project the balls pitch, length, trajectory, or great self belief that he can still get his bat on it if he guesses wrong!
make up your own minds on that one.