good name on the bat! thanks Sledgey for this image! now FUNK OFF HUGHES! 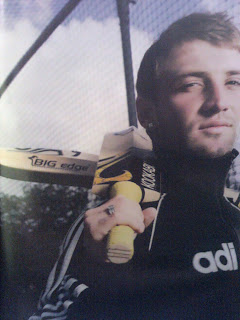 because if i don't say it, you don't know it!

watching the cricket show i found the Ricky Ponting interview interesting. I've been going for his throat a bit over the last 18 months- although i do recall asking why he can't step down as captain but remain in the team if he is making runs, what is overall a very unAustralian thing given captains retire or are 'not selected' sorry Bill!

in the interview he was very candid about his place in the side, what it meant to step down and his belief in himself to continue contributing. Most interesting were his thoughts regarding players 'knowing' when it was time to retire...and that he hasn't felt that yet, so he continues to train harder than ever.

Much is made about converting good scores into tonnes but i just don't buy into that. I didn't when Watson was making consistent scores over 50 and everyone said he NEEDS to go on. Why? i'll take a batsman that you can pencil in 60 runs -but no more- every innings over an uncertainty. And i feel the same about Ricky. He is nearly always good for 70 odd runs, well THAT is good enough! If the whole top order did that every time without a century you'd win every match! it is THAT simple. the "value" of 3 figures is purely a construct of the imagination and statistician.

so for mine Ponting can stay on in his current form, the bigger question is what we do about being a bowler short?
Clarkes bowling changes have been good, but his options are limited, and i believe will be shown up more against the batting quality of India. Obviously Watsons return is critical, but will that be enough? 3 seamers, and all rounder and Lyon?
Watsons return and the need for him to be able to send down 20 overs an innings MUST see Usi open and Watto in the lower middle order. Otherwise he will continue to spend more time on the physio table than the field and we can't afford that when we need his 60 odd runs an innings too.