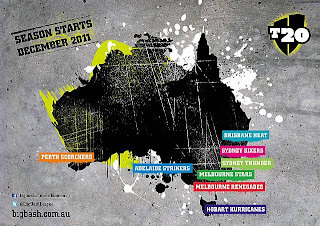 I appreciate that the format is of ZERO interest to my very discerning friends here, but, will anyone pay any attention to the new Big Bash format commencing this summer?

I for one will be if for no other reason then continuing the interest of my offspring in cricket, as this fast food version suits the attention span of single digit aged boys.

With Melbourne having to choose between two teams it will be of interest to me to see how much support the Docklands based Renegades get against the G based Stars. It was a no brainer choice for my eldest as i proposed his options... he loves the big stage that the G offers.

For mine it was a big mistake dividing the city when Geelong was a far better option that would have likely got support from regional (western at least) Victoria, more so with Ballarat not too far up the road.

If the format last longer than 5 years i'd be surprised if the Renegades were still there at that point; more so with the Stars having G. Shipperd as coach.

Still, several months out who knows what this heralds for the game and how it will be taken up by the public, i noted that the days the teams were announced the comments on FB were scalding not just because of the T20 format, but more at the structure of the competition, recruitment and the fragmentation of the Bushrangers.

But i'm sure you blokes don't give a rodents rectum for any part of the whole grotty thing, and this i understand.