I didn't know if we had the ticker to deal with a batting line up that deep, particularly given our inability to take 20 last summer, but as it turns out at least that element of the team is working well.

Clearly it was a challenge for all batsmen over the 4 days- only 7 half centuries and no tons, although 17 scores 20 or over shows that a start could be made.

I still find the 'traditional' 2nd dig collapse a concern and hope more 'batting camp' time can be found, although i doubt it is lack of ability and hinges a little more on playing themselves in.

What is left to be said about the Australian bowlers? Not only did they execute their plans perfectly, they improved their length so much so that it gave little respite to the Indian batsman.
I think this "new length" and the ability to hunt in packs, along with Clarke's astute changes has been the big difference. We are still a seamer short though as that workload WILL take its toll, but at least Clarke feels confident to rotate them before they tire and lose their attack or composure.

A bit is being said of Patto being a little too aggressive, but i don't buy into this; a young fast bowler should have a bit of mongrel about them. As long as he knows when and where it is appropriate more power to him! If he cops a few around the ears or into the ribs in Sydney and he acknowledges it with a smile and a nod then it is carte blanche for mine. Of course if he gets upset copping it from bowlers then he shouldn't do it to bowlers in the first place. On the TV Binga said you didn't walk down and stare/get lippy with Sachin because he'd make you pay, well as long as Jimmy P knows this and picks his target he can go for his life for mine.

Unless an injury happens i predict no change to the team; but we all know one that should happen. For all of Haddin's getting out in front of the media as vice captain and speaking well enough, he is still failing on the field. If he isn't dropped going in to this Test (and fails again) a Mickey needs to put his hand on Haddin's shoulder on day 4 and tell him to make the retirement announcement in front of the home crowd.

Lyon must be hoping for a tradition SCG pitch given his meagre returns, and the expectation that he will be more in the match should also hold Christian out of the side a while longer. But if he fails to get a bag, he may see himself left out for Perth and replaced by Christian or a fit Cummins or Watson. Personally i'd love to see in Perth: Siddle, Hilfenhaus, Pattinson, Cummins- that would have some sting to it!

But that thought is for another day- onwards to Sydaney!

Free advice at a great price!

How often do you hear on the radio or tv a call from the commentators to "Come down to the ground after work..."?

They'll say it because the cricket is interesting or it is a beautiful day. Yesterday it was both so i thought i'd do just that. Now living 19 stops away it is a fair commitment of time and travel to get to the G for just one session but i was captivated listening to the days play and was also under directions to get the youngest out of the house as the boss had an assignment.

Due to the travel time in and out and the game time remaining i needed an 'all day' train ticket for both of us, no biggie, i'll do the right thing. So we got to the ground just after 4pm hoping, but not expecting, the gates to be open- they weren't.
I went to the ticket booth and was told that because it was family day the grommet would get in for free- great! Still with less than a session to play i was expected to cough up for a full days ticket. Realistically, with the gates opening in less than an hour i was being asked to pay $31 for less than an hour!

Now i know the Boxing day Test is CA's and the MCC's big cash cow, 40k yesterday, 50k the day before and 70k on Boxing day, but full price for less than a session is just greedy...and stupid on their behalf! If they want people to "come in after work" how hard would it be to structure the ticketing to allow for a last session reduced cost ticket? 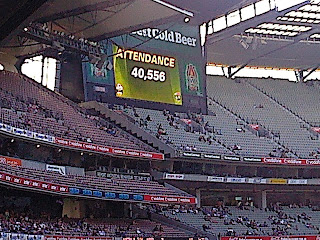 I wouldn't have baulked if it was even half price for 1/3 of the day, but on principle i couldn't wear full price. So i politely told the ticket seller something to that effect and went for a walk around the ground to find a gate away from the direct bee-line to Richmond station open. Does any one else find that practice peculiar?

So, CA, MCC, whoever is in charge of pricing, if you want to maximise potential crowd numbers right through the day, make it reasonable and set a ticket price for the last session, I'd go every day if that was the case!

stoph verismo
down the wicket

Sorry i'm not sorry India, we aren't obliged to give Sachin his 100!

so after a title such as that i want to say, i love watching S.Tendulkar- and it was great to see him step over the rope late on day 3 to sign as much stuff as he could,, but after reading the papers and the web it appears we (Australia) are just expected to be the receivers of swollen goods and cop a ton from the little master just for the sake of good sport...Well BUGGER THAT! 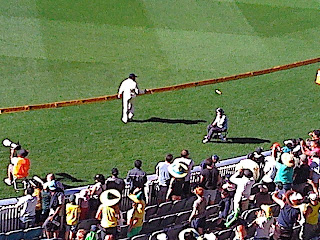 Tendulkar after signing a LOT of autographs

Well done P.Siddle for raining on the Swami army's (and more so the BCCI)parade and seeing that your home side was in the mix.

I for one am SICK TO FUGGIN DEATH of BCCI (note- i didn't say Indian; i don't care about nationality/race/religion/what-the-funk-ever) they think and act like they own cricket. And the biggest piss off is that if you disagree with them and you are white YOU are called a racist! Well you can't have it both ways BCCI- Racism is a two way street, you don't have to be white.

You bully the ICC to ensure the most favourable conditions for your team. If you so distrust DRS, play without it EVERY time or DON'T play Internationally. You got away with the Symonds thing by bullying and threatening to go home and legal action tour expenses- bizarre, WE (CA) should have threatened to sue for breach of tour commitments- what is going on?

Both teams play under the same rules so i don't care about DRS- even though i believe it is imperative it becomes mandatory; the call that it takes it out of the umpires hands is RUBBISH! It is the accredited umpires that make the final call in the stands so that is one of the stupidest reasons ever.

Anyway, i went to the last session of day 3 this arvo with my youngest- stand by for my tirade against both the MCC and CA regarding tickets!- what an awesome day day 3 has been, as day 3 more than often is! Seeing Hussey hold his own is a Test highlight for mine. Will the first innings lead be the difference? I don't know. The Indian collapse was well counter-pointed by Australia's own, Melbourne can get results, but i would have lost money on a day 4 finish....hope i'm wrong!

WELL, a session can be a long time in Test cricket, and while the start of todays play is how any Aussie would script it, with India's depth it is still a case of needing to continue the grind into this batting line up.

With Sachin, Dravid and VVS all going within less than a 2 hand fulls of runs, hope springs eternal. But with the chase now under a 100... 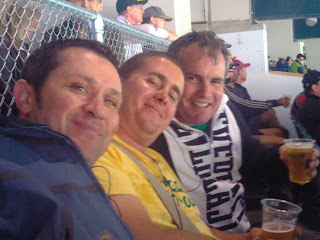 The day began badly with a cancelled train due to the hail storms the night before. A potential wait for a bus and a late arrival was saved by the champions Andrew and Daniel (strangers) whom offered me a lift to the next station. Some great conversation later and I was saying goodbye and good luck with the baby and I was off to greet my friends at the Captain Blood statue. 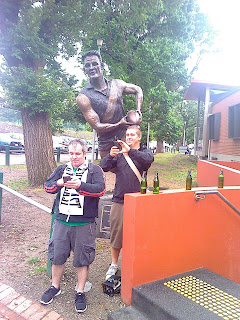 Hunger struck on the way and I coughed up nine bucks for the worst potato cakes and chips ever. The chips remained on the steps of Richmond FC but I downed the cakes and awaited my pals with a couple of Coopers' finest. 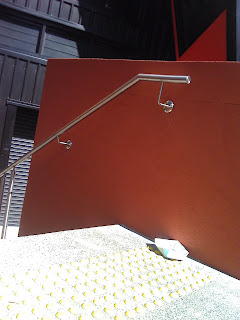 Stoph and family arrived soon after and it was hellos and laughs until Outey finally lobbed at around ten o'clock.

More beers and laughs and it was off to the G for the real stuff. It had been a long year of waiting. Entry went off without a hitch and we were safe and sound in the standing room awaiting the first ball of what would be a great day of test cricket.

Warner and Cowan displayed the two opposite poles of batting, Warner going nuts and lifting the crowd with a rare six and some pure stroke play, Cowan the dead bat of Boycott at the other end. Bill Lawry would have been proud. Stoph's bro decided to pull the pin, which was a shame. Hope the back's a bit better today mate. Stoph alluded to some sly beverage he might have snuck in and uncertainty about it's true nature, or what I might have referred to it as provided yet more laughs.

Some light rain before lunch provided the opportunity to duck off to the bottle O and get some more of Coopers' finest. This time a drop of '62 which I had yet to sample. Not too bad indeed. We ambled through Richmond's back streets and eyed some pretty decent street art on the way back to Sir Jack. 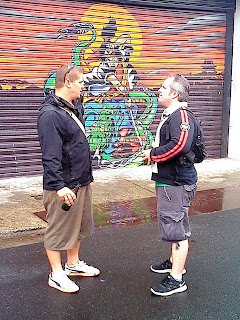 Beers were downed, and wasted on drunken old teachers with even drunker tales that I won't dignify with an airing here. Apologies are in order however, Port Melbourne were never in the old VFL... A couple more beers and we were back to the G for some more of the real stuff.

Another batting collapse seemed a certainty and eventuated, but little did we to know at the ground how much the DRS would have been appreciated by the Aussies rather than the Indians. Two howlers truly ruined what would have been a good day for us.

Attention turned to our current seating arrangements and the possibility of better ones. It was acknowledged that possibly the less fortunate than us may have better seating opportunities. Needless to say it was decided we would be more than looked after next year. Outey's reaction to the plan provided yet more laughs. It will be interesting next year to say the least. 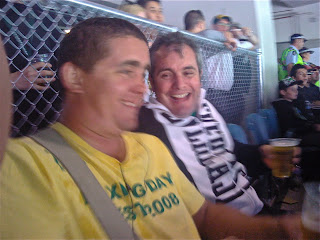 And so the cricket rolled on, Outey left and Stoph and I were treated to an up shorts view that will be remembered for a while. Quite a few heirs suffered because of that sight and will continue to do so. Not long later and we were saying goodbye and looking forward to Sydney.

And so my friends I say thank you for another great Boxing Day. It doesn't matter if we stay till the last ball, or get booted before lunch. It's the company and it was OUTSTANDING once again.