As you all know, Stoph has undergone facial surgery and is bravely battling time to be beautiful in time for the Adelaide Test. Having the surgery after the start of the cricket season shows extra resilience as I am sure he will be donning the creams before his doctor allows.
For the courage of his convictions he should be applauded, having surgery to satisfy Collingwood's constitution and have half of his teeth removed so he can "breath easier" is testament to his dedication to a cause. I am sure that Collingwood will hold up their end of the bargain and continue to win 2 premierships every 50 odd years. 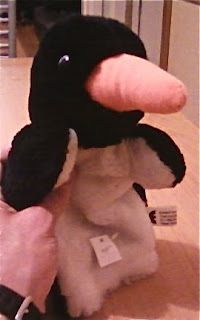 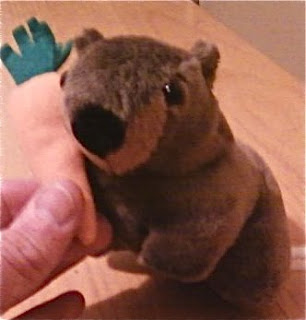 How does one give the finger to Selectors?

By making runs and taking wickets!

Shield cricket is always revealing but ever the more important when national selection is afoot. Victoria is showing why it is justified in bemoaning a lack of national representation by grabbing first innings points against NSW. Hussey (the good one) has made another ton against a team featuring Watson, Hughes, Clarke, Clark, Haddin and Jacques. While the big V relies more on a well-gelled side featuring one test player but several aspirants, NSW is a mish-mash of over-achievers out to prove themselves at all costs.

Meanwhile Qld is showing it may not have much to offer the test arena right now but it is still a formidable unit. Harris has booked his flight (well, bus ride as he'll be home) to Brisbane while Captain Superannuation Ponting has missed out on getting some time in the middle.

Eyes will be on state cricket like never before this season with unparalleled scrutiny of the national side. This can only be a good thing as whatever your opinion of the makeup of Australia's test team (really the only one that matters); there has to be players warranting selection and up to the task of international cricket - unless of course selectors' hands are forced. CA has one eye on the World Cup and as such is delaying addressing the test side which could prove costly when the surprise retirement of old age pensioners from its ranks occurs. Perhaps Dad's Army could bat in a wheelchair but it looks ugly when they're making their way around home in gophers.
Posted by leftriteout at 11/12/2010 01:12:00 pm 2 comments Links to this post

i've started a league:
WKMIKAS (women know men in kilts are sexy!)
for any one wanting to play

in the wake of the Tsunami

so, when the Ashes is done and dusted and we cement our place at #5 in the test rankings with a humiliating defeat on home soil to a better organised and structured England team that has played with a sense of purpose not just survival, what will need to happen to lift cricket in Australia and what shake up of Cricket Australia must eventuate to avoid further seasons in the abyss. (how was that for a run-on sentence!?)

All of us here at DTW have lamented the lack of foresight from first ACB (during the 80's retirements) and CA (during the 2000's retirements), so what can we suggest as a vision for the future and to change the culture of, "we're great, and always will be....D'oh! What just happened?

Revamp the academy and tour it around the country- intensively. Including smaller scale grass roots visits to clubs on training nights. Yes there are a lot of clubs in the country, but this is where young people start so it should be for CA if they want to implement long term change.

organise genuine kids clinics that double as talent scouting ops. i say genuine because the one i took my boy to that was touted as such didn't even look at the little kids- even though it was stated they would, and only concentrated on the 15 and 16 year olds.

expand the CA contract system (much like SL have) to incorporate more and younger players... and guarantee that with performance, opportunities to represent will happen.
Performance based contracts for current squad; it removes doubt and speculation- if your numbers don't hold up, one of the other contracted young 'uns is ready.

OK Boys, instead of picking apart the selectors after they have announced the team I thought I would take the chance to get shouted down (or not) and name my 12 for Brisbane.
Note:
Katich is picked if his thumb is ok, if not Jaques comes in.
No specialist spinner on this deck for me, White can handle 10 - 15 overs a day if needed.
If Bollinger is unfit McKay comes in.

I was watching a morning news program today and saw the ticker quoting Chapelli as saying "Players for the Ashes team will be picked on form"
It's not the most reliable of sources and I have not been able to find the quote online anywhere other than Junior saying much the same thing.
It must have come from somewhere and it will be interesting to watch what happens over the summer and into the next year or two.
Posted by Outside Sledge at 11/09/2010 07:59:00 am 8 comments Links to this post 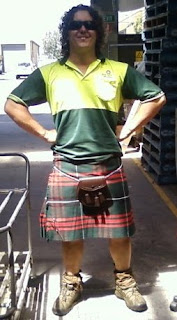 Outside Sledge proudly taking possession of his Heritage of Wales cilt

this is a message to all the "nay-saying" lovelies we happily live our lives with.
THERE IS NOTHING WRONG WITH A BLOKE IN A KILT!
if you are not sure, please talk to my better half. we went out socially with me as above, and she thought it was tops!
go on, live a little! this is a cool cultural accomplishment, and you and your man will be the life of the party. LIVE IT, LOVE IT! life is better Kilted!

think about this too... how many times have you looked at the cricket, only to see complete nob-ends getting fame? how much better will that be when it is your man looking gle (gaelic) very proud?