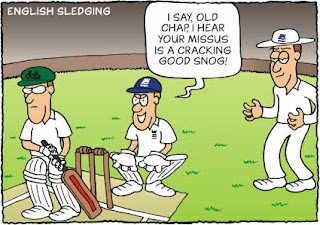 A fair bit is being said about the revamped, tougher talking and walking Aussies at the moment, and why not? Self belief and attitude are such integral parts of a winning performance in sport.

Firstly i'll start that Hey-dids has spoken out in the media saying England should, "Get over it!"
I don't know if he is that correct in doing this. I have read both KP and Cook saying it ok, not out of control, part of the game and basically expected from Australia so they aren't upset. Maybe that is their return of serve, "Doesn't worry me!" to counter any benefit that it seems Australia get from being lippy. But i don't think so.

Many a commentator laments the lack of, 'going into the oppositions change rooms for a beer after the game'. Be that as it may, many were not professional or played the later parts of their careers in the very under-paid professional era. The Ashes is the closest thing to war for our countries and the media and public glare are intense- positive results are paramount and socialising can come after the series or careers.

If England expect Australia to go verbal out of habit, they must have been stunned at the timid attitudes they received in the first 2 Tests. CA's wrist slapping and finger-waving after the heated Indian summer brings into sharp focus how little they understand the needs of their own team.

India were bloody big sooks that tour, prepared to let their players mutter barbs but threatening to take their bat and ball and go home when said player should have been pulled into line. Instead, we have our players dragged over the coals and subsequently their standard MO of playing affected; NOT GOOD ENOUGH CA!

Sure we are renowned as verbally hard when it comes to 'gamesmanship', and i'm not saying stepping onto the turf permits carte blanche remarks, but even professionals normally have a pretty good idea of where the line is, and if India and CA don't like the way we play- TUFF_TITTY!
CA have done SFA of late and India can hold their top ranking (after RSA, do they still) another way, sans pissing and moaning.

To their credit, i have not heard Poms carry on about it in the media (maybe a bit on the field but that just looks like them trying to play the same game) -correct me if i'm wrong- and if it lifts our guys MORE I SAY!

We here so much about other longer established nations "cultures", well this is clearly part of ours. i have experienced it at every level and type of sport i've played, and quite frankly it has no effect on me. i don't dish it out only because i'm slower than a slug on rohypnol and would only embarrase myself and then loose my cool and concentration... but i don't care what anyone else says. 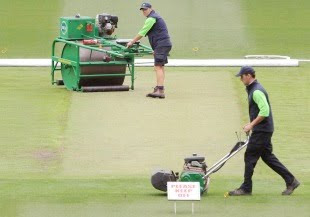 is it the right colour 4 days out?

Well after our dodgy and unsure start, we are in the gate!

My apologies to Lefty for causing him the stress of flying over to an uncertain outcome, but now the job is done.
Let's talk cricket.

I didn't do a wash up of the last test, but if i had to sum it up in as few words as possible, i'd say, "Thank you Cameron Sutherland!"
A great test track, that had everyone -including the Poms- say it.
Something for everyone.

Now the issue of the team selection for Melbourne- what a dilema!
With the ball, no one did anything that puts them in the, "please take a seat, mate" catagory.
Hey-Diddle didn't get wickets, but was tight and applied the torniquet, Hilf was much the same, and Jono and Rino were very very good.
So, does the G need a spinner? i like beer at the G, but would be prepared to give up Beer for the test.

Hauritz with another century must be... well, we all know what he thinks his chances are.

Pontings finger must be giving Kwahaja (must learn to spell that!)the drools. Will he, won't he? Punter has a habit of missing the od Boxing day, given i think it is his last chance, i doubt he will miss out this time.

Short and sweet today- there are many more things to be covered, but i need to do that which i'm paid for!

stoph verismo
Down the wicket

Apparently it’s going to be a packed house at the G on Boxing Day. A look on Ticketek has yielded only single seats in the platinum area ($145) which in isolation is not too bad but if you add in the $300 I dropped on Adelaide and drinks it makes for a very unhappy wife.

Obviously standing room will be the option but the view at the G is nowhere near as good as Adelaide from those areas which raises the question. “How early would we need to get there to get the last of the general admission seats?”

I think in retrospect we should have anticipated the popularity of tickets and planned ahead….
Posted by Nospmas at 12/20/2010 11:02:00 am 19 comments Links to this post