WEETBIX CUP
Under 11 cricket SEMI FINAL
DVCA/PLENTY VALLEY 1/82
def WILLIAMSTOWN 9/66cc
and its off to the MCG we go...!

My Nephew Blake Murphy is the captain of his U/11 Rep team and they have won their way into the State finals played on the centre wicket of the MCG this Sunday.
Diamond/Plenty Valley play Oakleigh at 10am.
All are welcome, entry is free and at gate 1. All seating is in the members reserve.

Blake has starred in all of his games especially with the ball, being told by the coach to bat if they won the toss in his first rep game he did what most bowling captains do when they look at the matting on the pitch, won the toss and decided to bowl....then took 3/5.
If you are free on Sunday it would be great to see you there!
Posted by Outside Sledge at 2/03/2011 08:54:00 pm 4 comments Links to this post

Sending Johnson in is a very good example as to why Ponting is limited in his ability to be anything other than a reactionary captain; Clarke knows his man and his ability and has created a situation where the game is ON.

Johnson with his head down is a fine batsman with nearly every shot. Coming in at 3 has allowed him to do this, play strokes, keep the run rate up and club the sh!te.
Pup, great tactic!
Posted by Cris Cochrane at 2/02/2011 08:16:00 pm 3 comments Links to this post 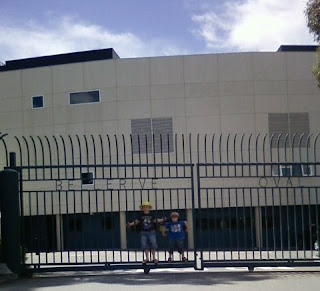 Part of the D.Boon Sculpture 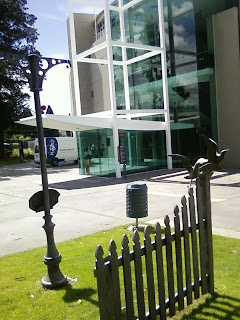 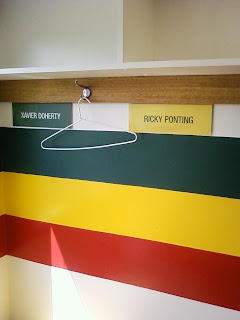 How close is this to the beach! 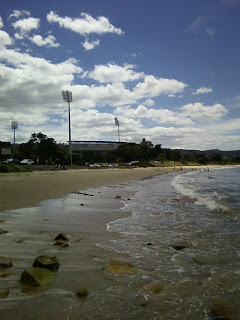 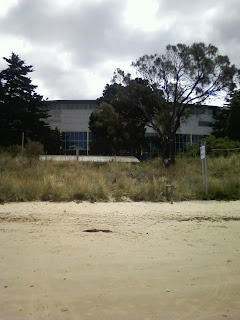 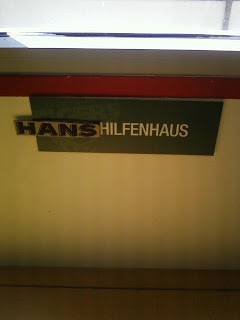 Out the back of the commentators booth towards the river 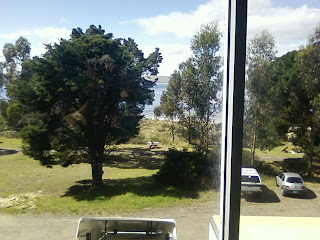 View from commentators booth towards the hill 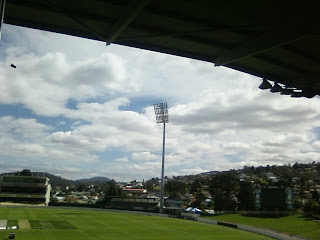 TV commentators view from the seat 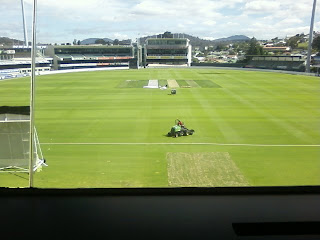 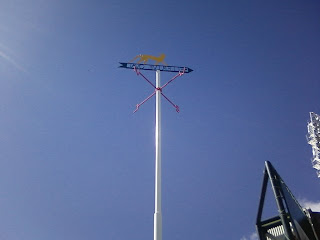 The view from the hill; square of the wicket with Mt Wellington in the background 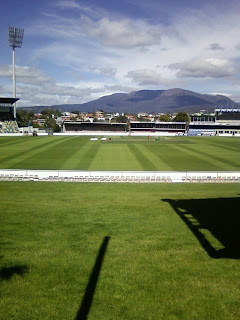 This glass is right behind the goal square! 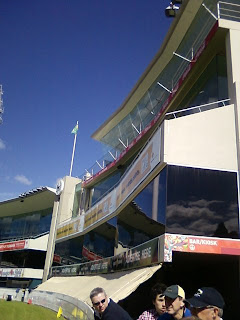 Return of the living dead!

As SS (or M&M, if you like) said, "I'm back!"
Sorry about my absence in the middle of 'cricket' season, the Apple Isle called and it was grand. Did a tour of Bellerive oval and museum, was able to keep Watto's fast ball out on the bowling speed simulator, and was planning to go to the ODI on the Friday but was informed there were only 1,000 tickets left and just for the hill and could see my boys terrorising the other patrons there worse than me and my animal undies did for Japanese tourists!

We all know Bellerive is right on the river, but what i didn't know was that there is a nice beach just outside the door (i'm talking only meters!); note to self, "Go to a Hobart Test, if it is hot take the opportunity to go for a swim at lunch!" Next test there, look out for interviews from Nicho with the river in the window behind him, it is a spectacular location and i believe the most scenic stadium in the country; not that i'd want to play there, as i'd be caught out daydreaming and looking up at the mountain and river WHILE in the field!

I will post a few pictures of the tour tonight.

Anyway, time for cricket.
So with all of my, "ODI is redundant and should be binned like 80 over old ball," it would seem that many in the cricket world think the sins of the summer can be forgiven with Australia's series win in the ODI and the close nature of most of the games so far. I must admit, i have been sucked into watching a couple of games (2nd innings) and eagerly checking the results when i've missed the matches.

To get result within the last couple of overs certainly makes for better competition so maybe i'm wrong about the 50 over format. What stands out to me is the effect t20 has had on the batting here too, as it has to the batting in Tests. Players stepping back and going WOOSH! Paddles around the corner to fine leg and more swats back over the bowlers head with a horizontal bat than you could...flash a bat at!
If this more gung ho style reinvigorates ODI, then maybe it IS a good thing, but i wonder if the lines across the 3 formats are then getting too blurred... at the detriment of technique.

A tight comp in the world cup could revitalise the format like a zombie on a feast of brains, but for how long? As a 40 something cricket fan, i grew up as the ODI version found its feet and attracted a fun loving following that was accessible for people that wanted a result in a day, but with an ADHD version filling this prescription even more succinctly, it still looks like time to accept the diagnosis.

Rule revamps are a sign of ongoing development and commitment to improvement, or are just another swing of the crop to try and get a few more miles from a flagging nag! Certainly the 'free hit' rule fits this bill; an irony not lost on Binga last night as he set his traps only to get the desired result (a skied catch)on the free hit.

While on Lee, i'd like to add how impressed i've been with him over this series. As the senior bowler he has really led by example and shown he still has most facets of his craft in place... including his consistently blistering pace. Not bad for an 'old bloke', more so because he is obviously a lot more thoughtful about his bowling now instead of forceful. Someone please remind me who is leading the bowling squad in the Test team again please?

stoph verismo
back at the crease